The Donald is in the (White) House

Donald Trump has won the U.S. election and undoubtedly surprised many. While the real impact of last week’s result will present itself over the coming months, our friends at Vanguard Investments have provided some valuable and very sensible insight.

With the United States presidential election is now behind us, investors in Australia and around the world may wonder how their portfolios could be affected by the outcome of this contentious political season.

The answer – based on Vanguard research that looked at decades of historical data – is that presidential elections typically don’t have a long-term effect on market performance.

“It’s understandable that investors might have concerns because of the different policy positions of the candidates and the strongly held views of voters of all political persuasions,” said Jonathan Lemco, a senior strategist at Vanguard Investment Strategy Group and former professor of political science at Johns Hopkins University in the United States.

“Investors,” Mr Lemco said, “should invest for the long term and not subject themselves to the political whims of the moment.”

But he also pointed out that the volatility typically stops increasing shortly after Election Day, once the markets have had a chance to process the news 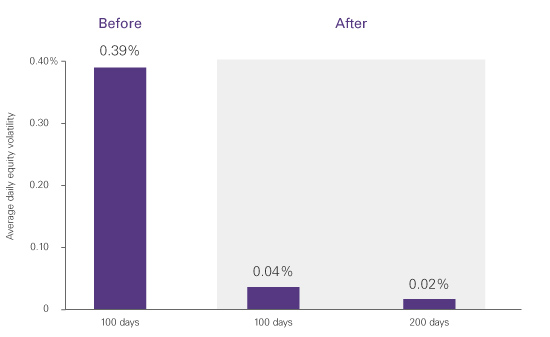 Markets do about the same under Democrats and Republicans

Vanguard research going back to 1853 shows that equity market returns are virtually identical no matter which party controls the White House.

Average annual US equity market returns based on party control of the White House, 1853–2015 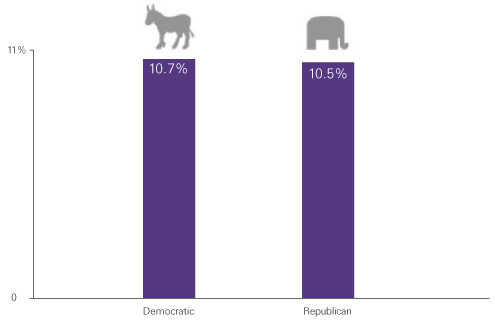 “Once you take into account volatility, the returns of the share market under Democratic and Republican administrations are virtually indistinguishable,” Mr Lemco said. “This is one more reason why investors should focus on more meaningful factors when it comes to their portfolios, such as diversification and controlling costs.”

“The primary driver of bond market performance is the US Federal Reserve,” he said. “Our research shows that the Fed has been active in several recent presidential election years, having raised and lowered rates. So its behaviour doesn’t deviate much from that of other years.”

Source: Vanguard calculations based on data from the Federal Reserve Bank of St. Louis, 2016.

Other factors are more important in the long run
Keep in mind that many factors influence market behaviour. Vanguard believes the most important is market valuations, but others include globalisation, technology, demographics, the Fed and the economy, and unforeseen events such as wars and natural disasters.

To illustrate this point, Mr Lemco noted that while the Standard & Poor’s 500 Index experienced some of its strongest gains during the presidency of Gerald Ford (a Republican who served from 1974 to 1977). This was primarily because equities were attractively valued following the bear market of the early 1970s that ended shortly after Mr Ford took office.

Is 2016 different?
Because the 2016 campaign has been surprising for some, investors might worry that this adds even more uncertainty for the markets. Mr Lemco cautioned that the current situation doesn’t necessarily mean higher volatility after the election.

“Despite the surprising nature of this election year, volatility hasn’t exceeded normal levels for a presidential election year and there’s no indication that it will deviate from typical patterns after the election,” he said.

What investors can do
Rather than react to the latest headlines, Mr Lemco said, investors should remain focussed on the following enduring principles, which involve things they can control:

“The outcome of the election is meaningful because markets inevitably react, and having some context for short-term market movements can help investors manage expectations,” he said. “But in the end, short-term developments are less important to our success than the big-picture trends that will shape markets in the years ahead.”

Interestingly, the U.S. market rose 1.40% the night after the election, with the British and German markets also rallying late. Volatility can impact markets in both ways and we are seeing the effect of that now.

As always, as a client of Ellerfield, we ask you not deviate from your plan. Should you have any concerns, please do not hesitate to contact your adviser for further clarification.

Speak to the experts. Get a free consultation with one of our advisers.